Years ago, when I was in grad school, my friend had a wonderful dog named Romeo. Ro was the perfect dog for taking on walks or bike rides (he had boundless energy), and he loved nothing more than a good game of fetch, with either ball or frisbee. However, he did have this tendency to run madly after a ball, only to suddenly find himself utterly distracted by something else (tree! dog! squirrel! car!), whereupon we were the ones fetching the ball that he'd lost in his distraction. My friend called him the Shiny Object Distraction Dog (she also happened to be dating a highly distractable man at the time, whom we subsequently called the Shiny Object Distraction Boy).

As of yesterday morning, I became the Shiny Object Distraction Knitter. But honestly, I defy any of you to say that you wouldn't have done the same. Off I went, just before 9:00 in the morning, to a knitting class at my beloved LYS. It was a wonderful class, and I daresay a good time was had by all. By the time I had to leave, I had completed the class project, and was wearing it proudly. 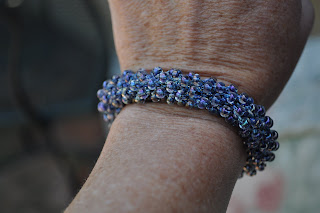 How much fun is that? And I've totally fallen down the rabbithole, because this morning, I finished this: 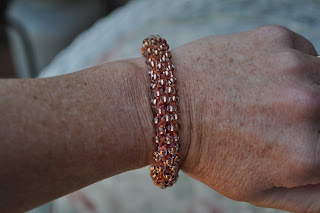 And let's be honest. The only reason why I don't have at least one more finished (you can only imagine the daughterous clamor for bracelets) is because I don't have any more of the findings that I would need to make them. You can see them there: incredibly powerful magnets (which are a Shiny Object Distraction in their own right; I spent an embarrassing amount of time playing with mine when we were out to dinner last night. Look! They stick to the table! And the knife! And the salt shaker! And...!!) 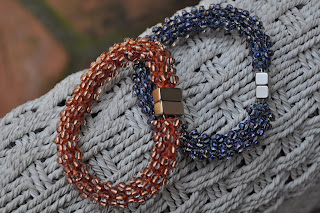 I knew I should have gone back yesterday afternoon and cleaned her out of these. This project is the perfect project for using up fingering-weight yarn (of which I tend to have insane amounts); it only takes about 15 yards. It does take up lots of beads (between 200 and 240 for the size I'm making), but I have all of those beads I ordered that I'm not using for the Tibetan Clouds Stole, so it's not like there's a dearth of beads chez moi these days. I anticipate that this will be known by my friends and family as The Year of the Beaded Bracelet, because these seem like the perfect gift. I wonder if Rick would wear one...?

I knitted that blue one first, because it seemed like the perfect go-with-denim bracelet, and my uniform of choice is denim bottoms (jeans or skirts) and a relatively plain top. One must add bling to such an outfit, mustn't one? And then, just as I finished and was wandering around the store, forcing innocent standers-by to admire my handiwork, I saw this skein of yarn. 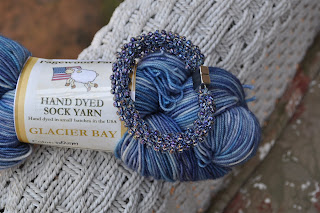 Fate. It was Fate, I tell you. Don't they go together perfectly? (The colorway is named, appropriately enough, Denim.) This yarn is destined to become a Just Enough Ruffles Scarf, I think; I spent an inordinate amount of time on Ravelry last night, looking for a scarflet in that very elongated triangle shape I'm loving, and that was finally the pattern that I bought. I haven't cast on yet, though, so if anyone knows of another one that I should consider, now's a good time to shout about it.
Posted by Knitting Linguist at 12:35 PM

The Just Enough Ruffles scarf is a lovely pattern-- quick to knit, and it made me feel so clever when the ruffle appeared!

You described my "uniform" perfectly: denim bottoms (jeans or skirts) and a relatively plain top. My top is usually a tee-shirt (often beaded or embroidered); short or long sleeves depending on the environment. At work, all the classrooms are airconditioned so even in the depths of winter it's a short sleeved tee-shirt for me!

You made me chuckle out loud several times in this post, loudest on "daughterous clamor".

Hie thee to the Westknits website and check out Stephen West's shallow shawl designs. Not only are the shawls all that, but he is totally adorable and sweet, even to women over twice his age.

They really are pretty!! Are they a kit, or just available through the class you took? I have some magpie-like friends who love a bit of the shiny...

Oh, what fun! If only I were a bracelet kind of girl.

And Bill and I call it, "Ooooh! Bright and shiny quarter," when we get distracted.

Or, "I like airplanes," which was one of his non sequiturs from way back.Said a la Forrest Gump, it still cracks us up.

I've been meaning to knit Just Enough Ruffles for ages so it would be handy if you could do it for me vicariously :)

I am easily distracted myself -- I can well imagine the magnet testing. I do have a bunch of beads around. Good thing I don't know how to do this wicked trick.

My friend Heidi (sungirl43130 on Ravelry) made the Just Enough and it looks so great! I think that color you picked out will look great with your new bracelets!

I don't think it's a bad thing to make this the Year of the Beaded Bracelet.

Oh, YUMMY! Shiny! Hmm...how do I get on your holiday gift list?
:)
LOVE the blue denims and the Just Enough Ruffles, is destined for my cart, too.
(((hugs)))

I'm staying away from the whole knitting jewellry thing.. I'd be in big trouble! They are pretty tho!

LOL over the magnet distraction during dinner, I'd be doing the exact same thing.

A fabulous distraction. These could push your girls over the edge into the knitting world. :)

My shiny objects of the day are 4-0 and smaller needles that I special-ordered at my LYS. So tiny. But so shiny!

Fantastic bracelets, can fully understand the fascination with the magnets

There is something to be said for a little (or a lot) of shiny on occasion. That particular shiny is going to make a great accompaniment to your knitting, too, which is an even better reason!