In fact, I actually have a completed project to show off today! Of course, I also appear to have fallen down, and am swatching for yet another new project, but I figure as long as I maintain some kind of balance between the casting on and the casting off, I'm doing pretty well.

First, the finished project. I cast off for the happy spring green socks on Friday night, and I'm pleased as can be with the results. 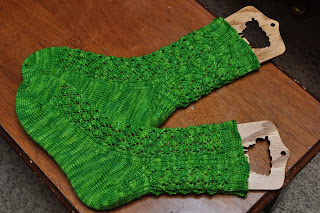 I'm trying to decide whether I should be a good mom and hand these over to Older Daughter, who I think would like them very much (and whom they would fit), or keep them for myself. I'll dither for a few days, I think. 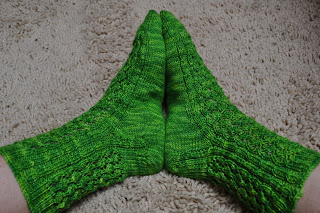 They are very happy, aren't they? These are the third installment of the Vintage Purls summer sock club. I really love her sock yarn, it's a great base, and the colors are rich and lovely. I'll definitely be casting on for the second installment sooner rather than later; I just need to decide whether to knit those as two color socks (with the colors switched for each sock), which is really fun, or to alternate the colors on each row, which makes for an amazingly deep and saturated color over the whole pair. I think I'll dither pleasurably over that for a little while longer. 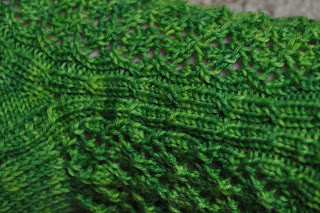 Those little cables just charm me to pieces.

I almost wound up and cast on for a pair of socks for Rick; it's definitely his turn (and then Younger Daughter's), and I have a lovely skein of dark blue Bugga sitting in my yarn bowl, waiting. But, as I mentioned, I've fallen down the rabbit hole again and am planning to knit another of Anne's henleys. She just released the pattern, and in looking at the pictures of her sweater, I was reminded of how very much I love the colorway that she knit it up in. So I decided that I needed one of my own, as a summery sweater, you know. She very kindly said that she wouldn't mind at all if I had a matching sweater, so off I went to the Knitting Notions website to order the yarn, whereupon I noticed that Catherine has the same colorway in a gorgeous merino/bamboo blend. And that in turn reminded me that I've been thinking that a bamboo blend would make a wonderful summer sweater, given the weather around here.

I wrote to Anne, asking for advice, and she immediately dove into her stash and swatched the merino/bamboo to see how it would turn out. She wrote a really interesting post about the process here, in case you want to check it out (it's down towards the bottom). The result was lovely, so I ordered the yarn. It came yesterday, and this morning I sat down and swatched it up. 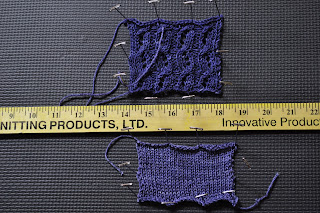 The top one is drying now, but the color of the bottom one is pretty true. 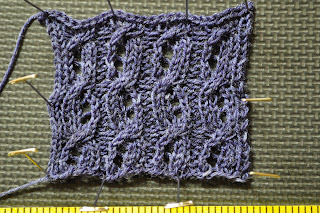 I think it's going to work beautifully. I'm planning to knit this one size smaller than my last version, for something that I hope will be lighter and airier and more summery; a sweater I can wear over a light t-shirt with shorts or jeans. I'm guessing I'll be casting on tonight.

Meanwhile, yesterday was a pretty busy day. Older Daughter once again had a very early soccer game. We were sitting on the sidelines by 7:30 in the morning, clutching our cups of coffee and trying to pry our eyes open. We then raced home to let her shower and change, and then took her to school for Stakeholder's Day, at which, she thought, she'd have to both play violin and staff a booth dressed as a medieval doctor (part of a project she just completed). It turns out that things weren't nearly so well organized as we'd thought, and that she was therefore the only member of her class team to come for the booth (and therefore the booth wasn't happening), and she was also the only member of orchestra to come to play (there were a few choir folks who were there). I pushed as much as I thought fair (given that I wouldn't have played by myself under those circumstances) to get her to play her violin, but she really was having none of that, so she ended up doing none of the things she'd thought she needed to. I hope they plan better next year.

Then she headed off for a sleepover with a friend, while I took Tilly to the vet. The poor pup had gotten grabbed by something on our walk on Friday. We noticed that she had a huge red splotch on her tummy on Friday night when she rolled over and we found a tick in her tummy there (a tick which, judging from its size, she'd picked up last weekend when she wasn't bitten by a rattlesnake). But she's been bitten by ticks before and never ended up with a huge red spot like that. And we remembered that she'd acted really oddly at one point on our walk running around trying to rub her tummy and paws in the mud -- at the time, we thought it was either red ants or burrs, and picked all the burrs we could see out of her, after which she seemed to feel better. But now we're wondering if it was something else, because when we got up on Saturday morning, the red had more than doubled in size. (Fair warning, incoming bruise picture.) So I took her to the vet, who said it looked like she'd been grabbed by something that gave her a really good pinch. She's on antibiotics just in case it was a bite, and she's in no distress (even on Friday night I could palpate the spot with no trouble), so we're pretty sure she's going to be fine. But poor baby, look at her tummy! 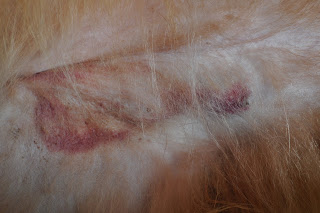 All of that was cherry red on Saturday morning, hence our concern.

And once that was done, Younger Daughter and I took ourselves off to our local Renaissance Faire, where she had shaved ice, and we listened to the Baudy Juggler, and we poked around and had fun, and ended by getting hennaed. She very much wanted a henna butterfly, which I allowed her to get on her upper arm where it won't show under her school uniform. I was wearing sleeves that wouldn't let me get to my upper arm for hennaeing, but Younger Daughter really really wanted me to join in her fun, so I decided in for a penny in for a pound, and went for one around my wrist. 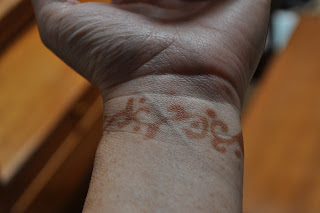 It's the last week of classes, after all, and can't I claim that this somehow relates to our work with Bengali this semester? I do believe that I can (at least, that's what Younger Daughter claimed; clever child). And so I will.
Posted by Knitting Linguist at 11:57 AM

Great socks! They look comfy - it'd be hard to give them up for sure!

I am catching up with posts and just read your saga of hiking in CA in the summer. Yep. Any hike when you walk home is a good hike. Phew.

Clever child, indeed! Do you have such restrictions at work?

(obviously, never mind)
Poor Tilly!!! I'm glad it's not bothering her, but ewwww...not surprised you took her off to the vet.

Ticks, ugh. I'm already pulling them off my horse, giant icky things. The Henley is a great looking sweater, and merino bamboo is a nice mix in the yarns I've tested. Perfect for spring weather, or too much AC. And yes, the henna seems culturally appropriate.

Yay for finished socks! Might be crazy to suggest; but maybe you could timeshare them with OD? Could be dangerous to encourage garment-borrowing, though.

Poor Tilly's tummy! I'm glad it wasn't anything worse than a pinch, but ouch!

I can completely understand how Anne's sweaters could be rabbit holes. I have a (rather thin) layer of protection because I don't knit from patterns, but every one of her designs tempts me. It's going to look great!

Wow - lot's of stuff going on here! The socks are great, and the sweater is going to be. Sympathies to Tilly, and congratulations to YD for having such a fun mother. (Don't tell her my YD plans for us to get body piercings together next time we are together...we'll see about that!)

I love the color of the socks! So pretty!

I also like the pattern for the sweater. I swear this summer I am going to figure out how to make a sweater that fits me . . .

Also, the henna is pretty too. All in all, sounds like a good couple of days.

I have blogged again, so it seems to be sticking. Fingers crossed, I'll keep it up.

You have brought your girls up to be conscientious and committed to the things they are involved in - well done to you; and to Older Daughter for being there when others' weren't! Such commitment will stand her in good stead as she joins the world outside school!

You have every reason to be a proud mom.

lol, like mother, like daughter! Poor dog, that looks soooo sore.
Looking forward to the new start, it's a lovely pattern and a beautiful colour.

You and Older Daughter can feel virtuous for showing up. (phooey)

Will you make me one of those sweaters too, while you're at it? You could also just send me the socks to get that decision out of your hair.

Pretty green! It reminds me of lime KoolAde.

I'll send some getting-better mojo for Tilly. Black flies are out here, flinch!

Have fun with the henley, that'll be lovely for chilly transitional weather. I say that as it is 90 and 90% humidity here, I can't imagine putting merino near my skin today. I have jumped on board with the next sock test knit, I just can't help myself. I need to stock up on xmas gifts anyway.

Heh, a henna design that looks like OM sounds close enough to Bengali!