I don't know if you've ever had a Knitter Encounter in an unexpected place and time, but I had one yesterday and it reminded me that knitters really are everywhere; I find this comforting. If only we ruled the world...

Yesterday we drove up to Irvine to the Bowers Museum for the last weekend of their Silk Road exhibit. I have been absolutely dying to see this exhibit since I heard it was coming, both because it looked interesting in its own right, and because I had read a lot about the mummies of Urumchi because one of the researchers who has been studying the textiles found with the mummies is none other than my college professor Elizabeth Barber -- the one whose teaching and research inspired me to become a linguist. I think I've mentioned before that learning to knit, and especially learning to spin, have felt a bit like coming home to something I've been working my way towards for a long time, and I think that's in no small part because of Betchen and my admiration for her work. (I also think I've said this before, but if you haven't read Women's Work: The First 20,000 Years, you most definitely should. I am currently reading her book on prehistoric textiles, too; very dense, and very interesting.)

So, there we were, wandering through the museum. And there I was, getting my face much closer to the textiles than most people, in absolute awe of the fineness and evenness of the yarns used to weave them (will I ever spin that well? probably not... and can I just tell you how much I want a loom? I want to know how they do that!). I stopped in front of an lovely face covering, woven in blue and gold silk, and I said to Younger Daughter, "Wouldn't that make a gorgeous pair of socks?", and a woman standing near us turned to me and said, "Knitting on the brain?" To which I could only reply, "You, too?" I had to laugh. It's good to know a) that I'm not the only one whose knitting practice is inspired by other things, and b) that there are people out there who immediately understand the implications of seeing a textile and wanting to make socks. I wonder if she lay awake last night, too, designing socks based on thousand-year-old textiles? I have plans...

I've been working on a number of textile projects while watching the Tour (and isn't Andy Schleck a doll? Next year, Andy, next year...); I'll share those next time. But I also spent Saturday rewaxing our dining room table, which put a bit of a crimp in the spinning plans for the weekend, as it took a lot longer than I'd thought it would, and didn't turn out as well as it usually does. The table is unfinished (by design), and needs to be waxed from time to time. Generally, this isn't a huge job, especially if one does it on a regular basis. Last time, though, we decided that we really didn't like the toluene that's used in standard waxes, and Rick went on the hunt for something with a slightly less scary solvent. He did finally find something, but by the time he'd found and ordered it, Older Daughter had managed to spill calligraphy ink on the table (don't ask), and the rewaxing job became a get-the-ink-out and rewax job. Long story short, I hauled the table outside and started work. 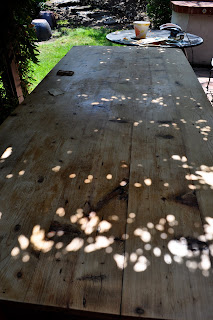 You can see how uneven the finish is there. The goal was to sand out the ink, then to do a quick run over the table with some fine-grit sandpaper, and then to apply the wax. It was the ink sanding that did us in; Rick recommended 60-grit, and while that took out the ink, it turned out to be a mistake. 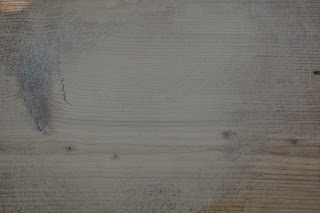 60-grit digs deep. From that decision came hours and hours of sanding to try to even things out. The orbital sander doesn't really work, as years of waxing has soaked wax down deep into the wood grain, and the sandpaper clogs up quickly. So I did almost all of it by hand. It looked good before I put on the wax coats (five or so hours of sanding later): 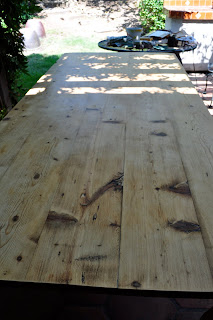 See how much more even and lovely that is? Well, what you're not seeing is the scratching from the 60-grit, which didn't show (after all that work) until I put the wax on. It shows now, drat it. Five coats of wax later, the wood stopped drinking, but I'm going to have to take it all the way back down to bare wood next time with a belt sander (and a LOT of sandpaper) to get the scratches out. Sigh. I stopped before the final buffing of the last coat of wax, both because my hands were a mess (the sandpaper has taken layers of skin off, and they're bruised and swollen, alas), and because the sun had gone, and the sun is what keeps the wax just soft enough to work the extra back off the table. Rick, bless him, did that last bit yesterday. It looks happier, but I'm sad about the scratches. 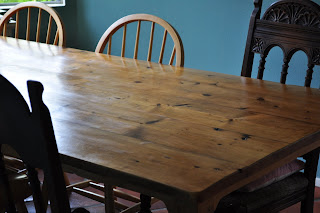 I probably wouldn't be so sad if I didn't love this table so much. It was an anniversary present from my parents when we'd been married a year and were about to host our first big Thanksgiving dinner (turned out even this table was too small -- we had 20 people at that dinner!). It was custom-made to fit our dining room at the time, and to fit Rick; the legs are an inch longer than standard, and the skirt is cut up an inch, too. It's also wider than a standard table, which means I can, in a pinch, seat two at each end, and also that there's plenty of room for serving dishes down the middle, even when it's fully set. (All of this means that I have to work very hard to sand that puppy, since I don't have much leverage at my height.) 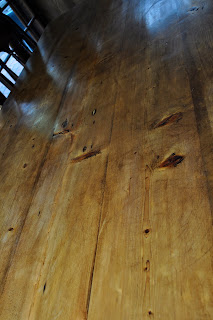 Isn't it pretty? The scratches are a bummer, but the good thing about an unfinished piece of wood is that I can take it back down to the bare wood next time and get rid of them. 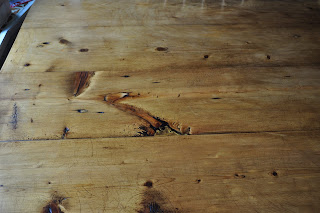 OMG what a gorgeous piece! And yes, I totally understand the entire process, and the rationale is there ANYTHING more wondrous that gorgeous wood? Wax on wax off...
:)
Off to check out Betchen's work.
(((Hugs)))

I love that table. Hope the hands heal quickly

I am not you and you are not me. That being said, I wouldn't be so quick to erase daughter's ink spill. Never apologize for good story material.

Imagine when her beaux come for dinner...

As much as I love the knitter story, the table story is that heartbreaking! It looks wonderful now, scratches notwithstanding. But the scratches are your family history, so you'll tell that story in years to come, when Older Daughter brings her daughter for Thanksgiving dinner.

The scratches give it character. Or possibly, give you muscles. Seems like a decent trade off. It's a gorgeous table!

I figure there will be more scratches (and ink) before long. Looks great, what a wonderful story for the table.

I'm impressed with the table, but totally blown away by the fact you know Elizabeth Barber. I read about the mummies of Urumchi in Smithsonian (I think...) several years ago and immediately bought and devoured the book. Such an amazing story! How I wish something like this would come to Columbus...or even somewhere within a day's drive. I'd be there in a heartbeat.

It looks like we might be spending some time a little closer to you - my DH is going to an 11-month class at Fort Huachuca, AZ at some point, & that's long enough that we would go with him.

I am going to be upset if the Silk Road exhibit comes to the Penn Museum while I am on the wrong side of the country.

In any case, I will get to the Arizona State Museum & see the Tonto shirt!

PS, did you see the little extras at the Bowers Museum blog?
http://bowersmuseum.blogspot.com/
Check out the entries from March on.

I think that table looks beautiful. Sanding can be a tricky process. I remember when I did a whole house of hardwood floors - different, yet similar. I wouldn't worry too much about the scratches.

Gorgeous! And I can imagine how the shoulders feel...

My finished dining room table is scratched and poked. Character, you know. I keep reminding myself of that.

I think the table looks beautiful - and those aren't scratches - they are character lines!

Isn't it nice to be unexpectedly understood?

Your table is gorgeous, a few scratches notwithstanding. I've been doing some of my own sanding lately (the reeds for the loom are horribly rusted, and each and every one of those little metal bits needs to be sanded before it can be used), and I completely sympathize. It is gratifying to have such a stunning final result, though. =)

I love that table! The history, the way it looks, everything about it. And how lovingly you care for it. Absolutely gorgeous.

Beautiful dining table with or without those scratches that probably no one but you will notice!

Gorgeous table, even with the scratches. I believe I can feel your aching muscles, though!

Oh dear, I just hate it when things like that happen! The table is beautiful and I'm sure the scratches are not as noticeable as you think they are!!

I think your table looks absolutely gorgeous in the photos. I'm sorry if you are dissatisfied with all your good work. Just like with knitting, I am sure you are far more aware of flaws than the rest of the world!

A beautiful table - but so much work!