I went north, and I have returned. (Go north, not-so-young woman, go north!)

(It doesn't have the same ring, does it?)

It was a wonderful weekend. I learned not only the ten assigned verbs plus three endings (more aspectual endings than tense, I think, even though everyone persists in understanding them as tense)(and if that interests anyone, I would happily do the brief tense/mood/aspect discussion with regard to verbs some time; always willing, always willing), but two more verbs to boot! And one of them I even intuited based on the data provided during the learning of the first eleven. Man, did I feel good.

But even better was the fact that everyone else seemed to learn them, too. (One should expect that a linguist could learn a few verb endings if push really came to shove; the real test of a good set of immersion lessons is whether they can capture and hold anyone's attention, and whether people walk away with useful and useable language. People did.) This was a three-day language camp for a language that currently has three native speakers (native in the sense of growing up speaking the language as a first language; they also happen to be Native), as well as a couple of pretty fluent second language speakers. There were a good fifteen or so of us at the camp, across at least three generations, and we all declared it a success. 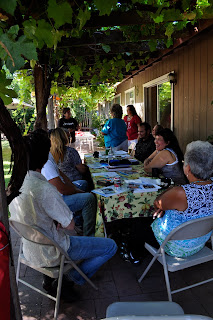 On the two mornings that I was there, I even got to go on a quick hike with Laura, the amazing woman who not only hosted this event, but who also finds all the grants that keep this project (and several others like it) going. I have absolutely NO idea how she does it, since I am a grant anti-magnet, but she writes them and manages them beautifully, and we are all grateful beyond belief. She's also wonderful company (and enjoys a good beer at the end of a long and language-filled day), and she takes me on good hikes with her dogs. 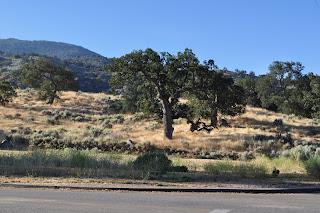 It is the sepia season here in California. I wish I could paint...

Our walk took us up a drainage (long since dammed, alas), near which there are grinding stones, very likely used by the Kawaiisu people who were the forebears of the folks in that first picture up there. 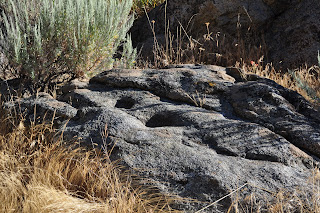 I can imagine women looking out at the view from that rock on a morning like this, watching the light come through the trees. 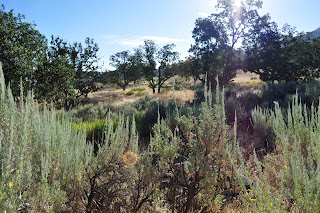 There are still a myriad of oaks in the valley. 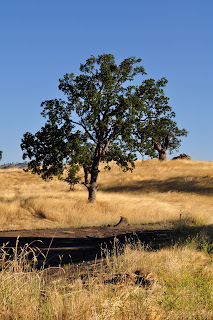 It turns out that language camps are also good for knitting. I finished the first of the pair of socks I'm working on for Younger Daughter. She is delighted. 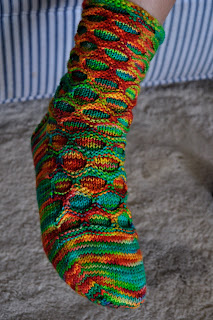 I was inspired to knit these after seeing Lori's. (I can't find the exact post, for some reason, but here's her Rav project.) They're the Circle Socks, and since I was rather winging the pattern from some scribbled notes I'd made, these are a little different from the actual pattern. Younger Daughter is pretty happy with them, though; she says they look like fish, and they really do, don't they? Lovely bright tropical fish. They are very "her". 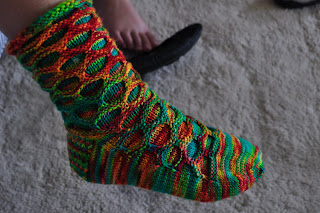 I have knitted mine out of Jitterbug, on size one needles. Had I had all of my needles with me, I might optimally have gone up a needle size, but this worked out well enough. I knitted them over 56 stitches, and made the foot a bit wider than the leg (62 stitches). The heel is eye of partridge. I broke my cardinal rule, though, and did not cast on for the second sock as soon as I'd cast off the first, so I must go tonight and remedy that, lest I neglect to get these done.

Next time, lace.
Posted by Knitting Linguist at 7:25 PM

Someone said, "The drainage--dam it, damn it!"

What a wonderful way to spend a weekend, at least I think so.

Love those socks. You're inspiring me to pull out some sock yarn again.

Oh, I'm going to be driving past you on Friday! I'll wave!

A satisfying weekend. With a sock! A bright happy not-sepia sock! Which isn't to say that sepia is sad.

(I can't paint or draw, but I started taking a notebook and coloured pencils in the car with me. Fun to play with at the cold beach. Or waiting for hamburgers and watching the eucalyptus)

I love the joyfulness of those socks, lucky younger daughter and indeed those are not boring at all!:)

awesome socks! it's such a fun pattern, isn't it - i love it in that yarn!

Well done on that sock - finagling the pattern, selection of yarn and needle, pleasing of daughter.

The camp sounds worthy and wonderful. And the colors in the picture of the grinding stones? I really want that to be a fiber colorway.

What excellent photos! The whole countryside is stunning, and I can, like you, imagine the women looking up from their work...
(sigh)
I'm glad it was a successful weekend...
The sock is so cool! Cast on that second sock !!!
(((hugs)))

Love your photos and your socks! Bet your daughter was pleased with them. I loved the colors and pattern.

Sounds like you had a great weekend all around.

Sounds like a perfect trip. (Or should that be pluperfect?)

Those are some seriously funky socks!

Sounds like a wonderful trip! Branden sent me a link to a complete language immersion program in Vermont (everyone takes an oath to speak in nothing but their new language for 10 weeks!). I had to ask him if he sends me these things just to tempt me...

I love the way the socks came out. Must work on learning some of that kind of stitch pattern; they work so well with handpainted yarns.

Ha! Those are cool socks. The bright colors make them seem tropical-fishy to me, too.

I'm trying to wrap my head around this...you're learning a language that only has three native speakers remaining? That's amazing! I am always sad when I read about all the indigenous languages that are and have been disappearing.

Got the Women's Work book from the library yesterday!

Very cool. And those socks are to dance for!

What a great way to spend a weekend.
Janet, further north in Seattle

Verbiage on verbs, eh? Well, not quite but it looks good phrased that way. Heh, heh, I crack myself up. Sry!

Those socks are nice and bright & cheerful!

My word verification is spolism. I want to correct it! Solipsism, dam it. :)

Wow, that sounds like an amazing way to spend a weekend! Of course, I am a bit biased, being of the linguisticsy-persuasion myself, but I think it's totally awesome.

Glad you enjoyed the language camp. Younger Daughter's socks are very colourful and cheery! And yes, they do look like fish.