I can stop anytime I want

I am apparently not quite done posting about the hats I've been knitting.  But there are only two more, and they're both for me! 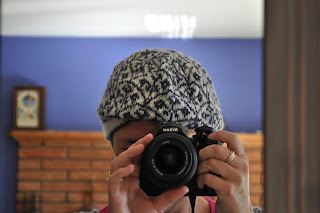 This is one I've been wanting to knit for ages.  I grabbed up the yarn a couple of months ago when I found out that my LYS might not be carrying the fingering weight anymore, and I've been staring at the yarn and the pattern, sitting all ready to go in my knitting basket, for some time.  The yarn is the same Frog Tree alpaca that I used to make my niece's mittens last fall.  And the pattern is Selbu Modern; I absolutely adore this particular motif.  I have high hopes of wearing this and the next hat when we go to Yosemite in a few weeks (where it should still be plenty cold).  Because I'm telling you - unless something changes around here, hat season is over in SoCal; the wisteria are blooming, the whole neighborhood smells like orange blossoms, and the sweet peas are out at the farmer's market.  It's spring!

But I still knitted one more hat that I've been lusting after ever since Anne started knitting it.  The cables in this hat are so sculptural, it makes me happy just looking at it. 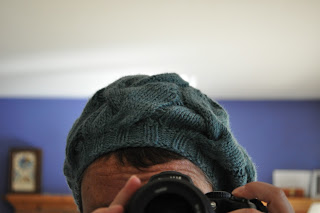 Of course, you can't really see it here (no-one around to take pictures for me, so you're stuck with what I can do myself), but this will give you the idea. 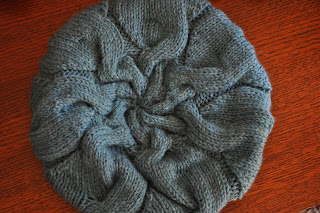 The yarn is the same yarn that I used for my Congressional hats; see, they really were something I'd wear myself!  I really like this yarn (Berroco Ultra Alpaca) for hats - it has a lovely hand, and it's a great weight for knitting on size seven needles, pretty quickly (at least, it certainly feels quick after colorwork on size twos!).  The pattern is Anne's Monkeybread Hat, which she has just released (she includes a scarf pattern, too).  You know how much I love her patterns, and this is no exception.  Clear and concise, and the results are to dye die for.  (Obviously, I have color on the brain right now!)

Part of the reason for that is that I've just finished spinning the fiber I was hoping to have done in February - two more hours would have seen it done, but it came down to mom's sweater or the spinning, and we all know where that went (with good reason; you should see how great it looks on her!  She's going to send some pictures I can share).  In any case, I now have 330 or so yards of a lovely fingering-weight (I think - I haven't done the wpis yet, but that's what it looks like to me) three-ply sock yarn, spun out of superwash BFL that I bought from the Sincere Sheep booth at the Dixon Fiber Festival last October. 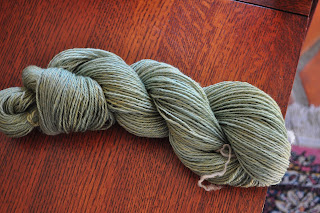 That doesn't really do the color justice at all - it is a lovely spring green with bits of yellow, just exactly what I wanted to be spinning in February.  I think I have enough yardage to knit myself a pair of the Rivendell socks that I've been wanting (I think I even got enough twist in there to make the stitches show up as they ought; those of you who are spinners should be able to click to embiggen and give me your opinions).  With luck, those can go on the needles either over spring break (next week! next week! next week!) or while we're in Yosemite.

Meanwhile, I have finally gotten the yarn that I have spent the last several months waiting for with bated breath (through no fault of the dyer - customs apparently likes yarn as much as the rest of us, and held this lot back for petting before she could get it).  Kim was so nice about my emails harrassing her checking up on the yarn (her patience was amazing, actually), and let me tell you, now that it is here, it is everything I could have hoped for and more.  The color is exactly what I wanted it to be, which isn't always the case.  There are actually several more colorways in this yarn that I would gladly knit - someday... And what am I knitting with it, you ask?  Well, the sweater pattern that I bought the minute I saw it, and have been carrying about with me ever since, waiting to cast on.  (Sorry, that's a Rav link; I can't get Twist to load, but it's the Leaving sweater - one of Anne's lovelies - from Twist Collective.)  I have this little hope that maybe, just maybe, it will be done in time to wear to Yosemite.  We'll see.
Posted by Knitting Linguist at 5:27 PM

Love your hats, and yes, the Monkey Bread set has been calling to me...and so far I'm resisting. I don't need to knit more hats right now, I need to knit shawls (oh, and start on my first sweater, right?)

Ditto what Sallee said, but especially on the yarn. It looks wonderful - the twist reminds me of some of my favorites. 3-ply is so absolutely the right yarn for socks and yours looks perfect!

Hats are so much fun and there are so many great patterns out there.

Sometimes a particular type of knit just calls to us - right now, I am busy knitting and enjoying "other people's patterns" which is a big shift for me.

The monkey bread hat is fantastic, can imagine a scarf in that would be fabulous

I'm inspired to get out my stash of Frog Tree alpaca and make the Selbu hat I've been planning on for several months--thanks for the reminder! And I must say that Ultra Alpaca is one of my absolute favorite yarns; I particularly like the sport/DK weight, and I've used the fine stuff for lace. And that sweater of Anne's, from Twist, you better believe that's on my queue, too! Looking forward to seeing yours.

Your yarn looks good to me! I think you should get good stitch definition (and good wear) out of your 3-ply. :D

A wonderful hat parade! I'm still thinking about the basket hat. I wonder how something similar would work in crochet? Not that I know how to crochet, but lately I have an urge to learn...

I love the idea that customs wanted to pet your yarn as much as you did .... makes the process seem more human some how, less administration or bureaucracy.
Those hats are amazing, I do hope that there is enough chill in the air to make use of them, I've been eying up Selbu modern for a while myself. But it is the sock yarn that I am in awe of, every time I try to spin sock yarn I fall short of the length I need .... so i find that really impressive. Well done.

ooh, I love the Leaving sweater too, and that monkey bread hat, I've been so tempted by it too. It looks gorgeous. What a lovely yarny few days!

I think you will love Yosemite in a couple of weeks, but don't feel bad if it is too warm for hats. Here in Oakhurst (about 20 miles south but similar elevation) we've had highs in the 70's and the daffodils are blooming. The falls should be gorgeous. Maybe you will see dogwood blooming...

You can stop, but why would you? I love the Selbu!

That yarn also looks great; it's going to make a beautiful sweater. And the sock yarn, too...there are too many things to comment on in this post!

Have fun at Yosemite!

I'm in love with the Monkey Bread set, too, but am restraining myself. I just finished a heavy, cabled, fabulous wool cowl that I've worn the past three days...even though it's really too warm for such a thing now. God knows what I'd do with an alpaca Monkey Bread hat on a 68 degree day...LOL!

I just want to say that I love your hats! Enjoy your spring break in Yosemite.
Someone told me about your blog today after I updated my own blog (about being a linguistics student) today - I realize I have used your name in today's entry title! I'm sorry, if you want me to change it, just let me know.