This is just a quick post (I think - who knows what'll happen once I start typing).  It's that time of year when things can start to feel sort of frayed and scattered.  And of course, what I'm feeling is nothing compared to what the people of Boston have been going through, or those in West (Texas).  Last week was a terrible week for so many people.  I spent a lot of last week having (as one might imagine) a lot of reactions to what felt like a deluge of around-the-clock bad news; I wasn't sure what to say about it, but it turns out I don't have to, because Erica wrote a post that really says everything I could have wanted to say, except more clearly.

I was feeling pretty frayed and scattered even before that, and I've been working pretty consistently on reminding myself to be here and now, not all the other places that my mind wants to go.  For me, the best way to remember that is to get my feet onto dirt.  So I've been trying to get myself (and Tilly - honestly, there is no better companion when seeking mindfulness than a dog; dogs definitely know how to stay in the moment) onto the trail at least a couple of times each week.  And my trails have certainly offered me a lot to pay attention to!  The weather has been a bit crazed.  Lots and lots of fog for a long time. 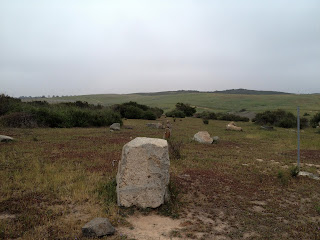 Is it just me, or does that look like Britain?  That's one of my favorite places to hike.  The other has been equally foggy - one morning it was so dense I couldn't see around the corner.  But I did get one moment of clearing. 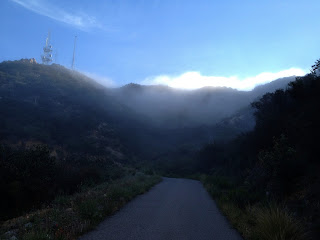 It closed in again right away.

The hillsides have shifted from purples and greens to reds.  The monkey flowers are out in full force. 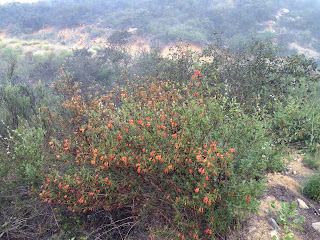 And I've even found some Indian paintbrush (at least, I think that's what it is?  Willow?  Can you confirm?) in a drainage on the west side of the hill. 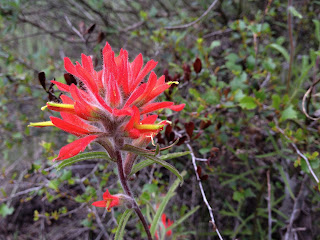 The sage will be out soon, bringing purple back to the color spectrum.  And I know that the blue-eyed grass is out, except not when I'm on the trail - at that time of the morning (and in the fog instead of sun), the flowers are shut up tight.

Knitting continues.  The sweater has grown large and unwieldy enough to make bad meeting knitting.  I thought I'd finished the hood, but when I tried it on, it was too small, so I picked out the kitchener stitching in the top and am adding some length.  I'm worried about the sleeves, as well, as they seem short to me (even though they're the same length as the body to the armscyes), but I'm going to finish up the zipper bands and icord trim and see how it fits with that added width in the body.  If that doesn't straighten out the fit of the sleeves, I'll snip out a stitch and add some length before grafting the cuffs back on (and thanks to Erica for that suggestion!). 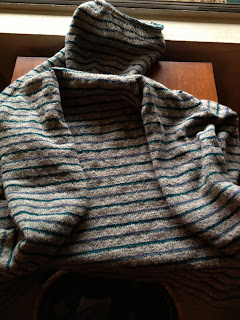 It's gotten so big that I finally treated myself to a basket from the farmer's market (I've long been thinking about getting one for exactly this sort of large colorwork project that requires lots of balls of yarn to be carried around with the knitting at all times) so that I could have everything in one place. 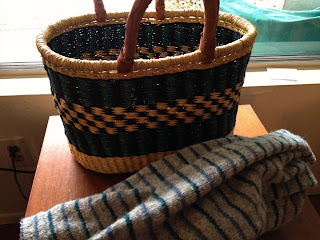 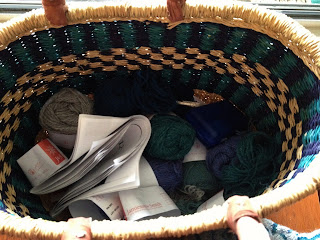 But, as I said, it does mean that this no longer makes good meeting knitting.  So I cast on for a pair of Lady Treymour socks (from Clara Parkes' Knitters Book of Socks).  Pictures of those next time, but I have to admit that the charm of knitting socks again (which I haven't done for some time) means that I haven't just been saving them for meetings - I need to start focusing on this sweater again if I want to finish it before I run out of fog.
Posted by Knitting Linguist at 9:42 AM

That one picture does look like Britain! Once we get our move out of the way I'm planning to start walking more. Perfect way to clear the cobwebs from your brain!

When I saw the first post I thought you had held out on us and secretly traveled to Hampshire!

Love the progress on the sweater and its new home!

Yes, it looks like Britain. The Indian Paintbrush (if that's what it is) looks very much like a native plant here called Kangaroo Paw.Love your sweater and its basket -- but yes, too big for meetings!

Such good fog. I love walking in fog, but I usually get out too late for the morning cover.

(no fog this week so far - crazy clear and warm!)

Yeah, last week was awful. I'm glad you got out for some unfraying time with Tilly and the hills.

Great post. I want to walk outside now. I enjoy walking in the fog. The basket is well earned purchase, for your sweater project progress. I like the stripes a lot!

I really do like this sweater. And fog, except when driving in it.

Beautiful photos! I've been thinking of a trip to the beach, for similar reasons. Nothing like nature to take you out of yourself. Who knows? Maybe it will actually happen this weekend...

Confirmation: it is Indian Paintbrush. My handy dandy Flowering Plants of the Santa Monica Mountains book has a photo which is exactly like yours.

How many more weeks? The Professor has two weeks of lecture and then finals week.

I do love foggy mornings as long as the sun breaks through by noon. I admire (and envy, a little) your easy access to the hiking trails.

Good to read today, mindfulness is alluding me. Just need to get fiber in hand and zen......