It's the end of the semester, which usually means at least some degree of chaos.  This semester was more chaotic than usual, with the fires that broke out here in North San Diego County.  Campus was closed on Thursday afternoon (leading, I understand, to the usual madness of trying to get nearly 20,000 people off campus all at once; I am SO glad that I left early that day!), and stayed closed until Sunday afternoon, meaning that I missed my last day of class, and fielded a lot of worried questions from students in the lead-up to finals this week.  We were largely out of the way, although the Lilac fire was close enough that we kept the pets indoors for a couple of days, in case we might need to evacuate, and one of my friends ended up staying here for a night when her neighborhood came under mandatory evacuation orders.  If you've been following any of this, you also know that San Luis Rey Downs lost a lot of horses, so there's been a lot of talk and sadness and stress about that at the barn where Disco lives.  She was safe, but we have all been keeping a weather eye on the horizon, looking for smoke.

The winds died down for a few days, but we're expecting that they might pick up again today and tomorrow.  And it has stayed brutally dry.  Last week, the humidity hovered between 3 and 5%.  Lately, it's been up around 15% (woo-hoo!), which, if you've never lived somewhere quite this dry, is really pretty awful when it stays that low day after day after day.  You just can't stay hydrated and moisturized enough.  It also means pretty dramatic temperature swings.  We're getting up into the 70s during the day, but during my morning walks, before the sun comes up over the hills, it's around 40 degrees.  (I know - not that cold for you guys, but it feels pretty chilly to me!) 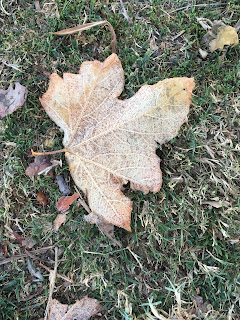 The grass crunches under our feet as we begin our walk, and the leaves are frosted and beautiful. 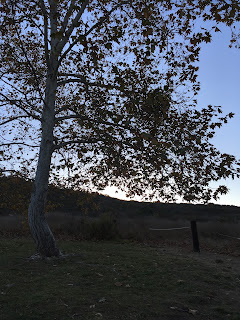 The trees stand, patiently waiting for the first rays to touch their uppermost branches - I can almost hear them sigh in relief as the sun comes above the hills.  And I can definitely hear the crows hollering as they seek out the warmest places to perch and warm their wings.

The house stays cold, even as it warms outside.  This is a benefit on hot days, but right now, when it's 65 inside, I'm pretty chilly. 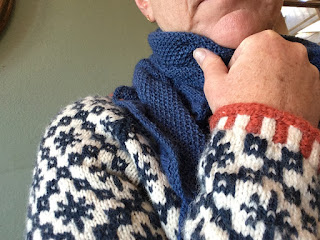 Loving my warm sweater!  Who knew it would be useful here in Vista?  (I kind of figured this would be a sweater I wear to the mountains in the winter, but it's also good for sitting at the computer and working.). Gwilim thinks it's cold, too. 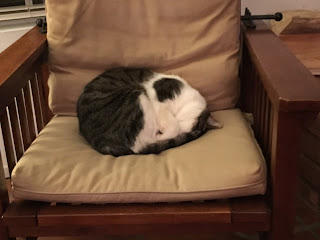 Meanwhile, it's all grading, all the time here.  I think this picture pretty much captures my current state of affairs. 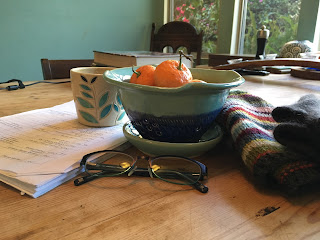 Stay warm and safe out there, y'all!

our house stays cool too - definitely not fun in the winter, so the woolies are most useful!