I’ve been wondering why I didn’t formally shut down the blog and say goodbye to it.  I was ready to, last February, when I hadn’t written another post in a while, and was feeling pressure to do so.  At the time, as I contemplated actually stating to the world that this phase of my life is done, I felt relief.  There were a lot of reasons for that.  One was that I felt (and I still feel) that I maybe have something bigger to write, and that I wasn’t getting to that.  Frankly, I was also feeling overwhelmed by everything that was on my plate, and the nagging sense that the blog was there, needing to be fed and watered, didn’t help.

Without fully articulating it, I think I also had, and have, the feeling that I’m going somewhere else in my life, and that, while writing about knitting isn’t something I never want to do again, the mulling thoughts that want to come out of my fingers and onto the page, the conversations that I want to have with other people – those are much less about knitting right now, and more about other things.  And that’s kind of scary.  This is, after all, the blog of the knitting linguist.  And if I’m not writing about knitting or linguistics… I was about to say that I worry about alienating people who came here to read about knitting, but what am I talking about?  This blog has been essentially defunct for some time!

But last week, I had an experience that really made me want to write about it, even if no-one actually ends up reading it.  And it made me realize that at least one answer to the question of: if this is not the blog of the knitting linguist, what is it?  Is: the blog of the knitting linguist, this time with RA.  Of course, that’s only one answer to that question, but it’s a relevant one.

I think I’ve said before that, last summer, I was diagnosed with rheumatoid arthritis.  A lot of other weird things happened last summer, too, but that one’s been a bit of a focus this year.  I’ll talk more in another post about how that diagnosis came about, and about how lucky I am that it happened as early as it did in the course of the disease, but for now I’ll just say it’s not raging out of control, but neither is it really under control, which is an interesting liminal state to be in.  It means that there are times when I feel that I am not quite as able to do the things that I was able to do a year and a half ago.  And when that happens, and I feel the cold wind of “what will this be like next year”, that I come face to face with a very different kind of understanding about access and ability and difference.

This time, it hit me in a surf shop.  One thing I have been wishing I could do is to swim more in the ocean.  And by “swim more”, I mean “swim at all”.  The ocean has felt too cold to me to swim in for some time.  Call me a wimp, call me temperature sensitive, call me whatever you want, but while I’m happy to walk along the beach, and (depending on the season) get my feet wet looking at tide pools, I haven’t gotten in to swim in a very long time.  I particularly, this summer, began to wish quite strongly that I could snorkel.  So we rented wetsuits and snorkeled in La Jolla a few weeks ago, and I was delighted.  A wet suit changes everything!  Who knew?

I’ve been putting off going into a surf shop to try on wet suits – that’s a whole lot of decision-making and choosing, and I wasn’t motivated to get it done. But we drove by one with a big Labor Day sale sign out front, and Rick pulled into the parking lot, and there we were.  So, we found some suits that looked like they might work, and off I went into the dressing room.  Where I found the first indication that I am really not represented in Wet Suit Land: 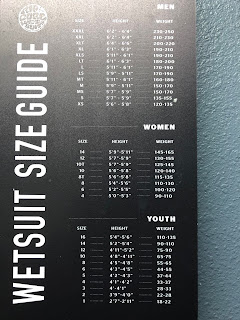 But that isn’t even why I’m writing this – I’m so used to not being represented in clothes sizes that I’m pretty inured to that reality.  Nope.  What really hit me is that wetsuits are just not made to be easy to get into.  I know that they need to fit tightly in order to serve their function.  But I can’t tell you how hard it is to pull skin-tight stretchy neoprene up and down arms and legs with hands and wrists that are (even minimally – and imagine for folks whose RA has gone further than mine) weak and painful, with tender joints.  This is made much worse by the way the suits are built.  The ones I tried on first had back zippers.  That could be good for access, but those zippers are short, ending well above my waist, which means that the tightest part of the wetsuit (the waist) has to come up over the widest part of my body (the hips; see above), without an opening to help it along.  And then we discovered that most of the newer suits have, instead of a back zipper, a zipper that runs along the front left collarbone.  This means that the whole, skintight suit is like a body suit, with the only opening being the one at the top.  This is FAR more inaccessible than the already-difficult short back zipper.

And all I could think was, how do people who hurt more than I do, have more weakness than I do, have less mobility than I do – how do they do it?  Or is it assumed that they do not?  That they don’t want to get into the big blue?  Because I guarantee that some of them do.  Maybe the assumption is that dealing with being cold is the price of swimming with disability.  But for me, at least, the cold would make everything worse.  It would kick off my Reynaud’s, cool my joints and make them less mobile and responsive, and generally hurt.  This wetsuit is going to make it possible for me to swim at all in the cooler water.  (And note, I’m not talking about really cold water.  When we snorkeled in La Jolla, the water was 74 degrees, and even with a wetsuit, I was chilly at times.)

Trying on four wetsuits was enough to slow me down for the rest of the day.  Typing this took up the last of what my wrists could do that day.

None of this is to say that I didn’t know that mobility is a presumed feature of life.  I spent a lot of time with our grandmom as she aged, and was acutely aware of the way that the structure of many places made it difficult for her to get around.  And was also acutely aware of how frustrating and embarrassing that was for her.  I have had students with disabilities both visible and invisible.  Moving around campus with them has been an experience in frustration, in seeing the degree to which they had to plan each move of their day so as to get to class on time, get food between classes, access the bathroom, access space in the classroom.  Those experiences made me careful not to judge someone who seemed to me to be moving more slowly than I’d expect, using the elevator for one floor, taking out a parking placard.  It also made me aware of how invisible those access difficulties are to most members of my community.

As we all know, knowing about something is one thing, but living it, even just the edges of it, is different.  It’s interesting, and frustrating in a new way, to be inside the edges of this problem, instead of walking alongside someone while seeing it from the outside.  It’s a good reminder of how important first-person narratives are, of how critical a range of voices can be in any discussion.

It also makes me think that somebody should be able to design a wetsuit that’s not so bloody difficult to get into!  (ETA: Someone did.  They ain’t cheap.)
Posted by Knitting Linguist at 2:22 PM

I have loved and missed Knitting Linguist but I am excited about reading Knitting Linguist with RA. Eleven months ago I was diagnosed with a rare blood cancer and life has been up and down ever since. A lot of times I don't look sick but mostly there are a lot of symptoms and side effects and discomfort and a lot of doubt. I would love to read about your journey.

Thank you for your comment, and for sticking with me! I am so sorry to hear about your diagnosis - thank you for sharing this. Reading what you say, I imagine that at many times the doubt is what might be the most difficult thing to live with. My thoughts are with you.

I feel the same about my blog, but I'm not ready to pull the plug. It is a place to record things for me, at a minimum. However, it has been six months...

Sorry the RA isn't settling. Did you read Kate Davies post about the wetsuit? I wonder if she has similar issue of access into the thing.