The kids are coming home tomorrow! They've clearly been having a wonderful time. We got a few pictures the first day. 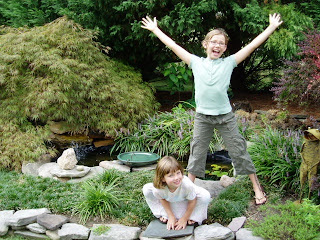 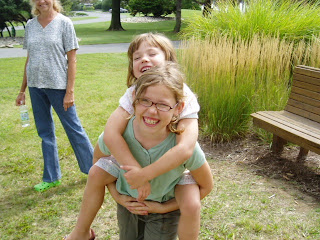 They're happy. So, I'm happy. Rick and I have been taking advantage of having this space alone. We've gone to the movies (saw the Bourne Ultimatum; I don't know who thought they were being artsy with the camera work, but I literally couldn't watch the screen for most of the movie -- it made me too sick because the camera was jerking around so much. I should've brought my knitting), and out to dinner (whole conversations NOT involving who is going to order which kids' meal!). On Sunday, we went to Pasadena to see an exhibit at the Huntington Library; it's called Legacy, and is composed of images of Native Americans in early American art. It was good, but I had my usual problem with it, which is to say that most exhibits about Native Americans end ominously sometime in the early 1900's. The unspoken message is that they're gone, it's over, and all we can do is look back regretfully (such a safe way to see this part of American history). As someone who knows damn well that Native cultures are vibrant, changing, living things, it's disconcerting; as someone who works with young people who have no idea that Native cultures are still present and vital, it's disappointing, and I think it's somewhat irresponsible. I also took Rick into the library rooms to see the Gutenberg Bible and the Ellesmere Chaucer, which were what brought me to the Huntington the first time (I was an English and Comp Lit major in college); he'd never seen them before and humored me by being appropriately impressed (much like the time I dragged him to see the Rosetta Stone at the British Museum, and he kindly acted like he was in no way embarrassed by standing next to a teary-eyed wife in front of a carved rock -- good man -- it was just so cool, though, that I couldn't help myself! This is how I know I'm a linguist...).

We also went to the Gamble House, which I'd never seen but had heard about from Rick, who went there on a college class field trip. All I can say is, damn, it must be good to be both rich and possessed of taste, because the combination is stunning. It's a beautiful house, and since Rick and I are both fans of mission style architecture, it was fun to see together.

Probably the most interesting thing we did, though, was to go back to our college campus (we met at Occidental when I was a freshman and he was a junior, and we lived in the same dorm; I was flirting with his roommate, and he was dating someone else when we first met -- the rest is history). Neither of us had been back since I graduated, some ahem-cough 15 years ago. When we got there, it turned out that it was the start of orientation week, and freshman and RAs were pouring in to the dorms. We almost snuck into Pauley, the dorm where we met, but figured it'd be better not to scare the freshman by looking like aging stalkers. As it was, we definitely got a few of the "who are those old geezers" looks; ah, youth. We wandered by the pool house (and valiantly refrained from telling the students nearby that you can sneak in to go skinny dipping by climbing over the roof and jumping into the pool from the overhang) and by the statue that a friend of ours at Cal Tech had kidnapped for a while, and by the cafeteria, which is still called Clancy's, after a cook who retired when we were there (and who was very upset to find that all of her forks had disappeared one week, only to discover them planted upright through all of the flower beds around the building); I'm guessing the students now have no idea why they call it that. It was odd to be there together so many years later -- it hasn't changed all that much, but we most definitely have.

We finished the evening by going out to dinner at Burger Continental, where we used to go out on dates. This time, though, we didn't have to order the deal-on-wheels falafel sandwich (the cheapest thing on the menu at $5.95, which includes all-you-can-eat salad bar and soup) -- we could get whatever we wanted. Ah, age. (I would say, maturity, but I'm pretty sure we're not there yet.)

Meanwhile, I have, in fact, finished the first Millicent sock, and am well into the second lace repeat of the second; with luck I'll finish that tonight. I also made good progress on the second sleeve for Kivrin's sweater during a 2 1/2 hour meeting on Friday (!!). I'll post pictures tomorrow after I get the girls from the airport (yay!). I am swamped with getting ready for school (still haven't prepped for my 10:30 class, and it's 9:20 now), so I'm off for now.
Posted by Knitting Linguist at 8:56 AM