I'm plugging away. Knowing that next weekend will have very little time for knitting, I've had big goals for this weekend. I might even achieve them. But I feel a little like Apolo Ohno on that short-track, trying to pass two Canadians and two Koreans in a lap and a half.

Yesterday was a pretty successful day. I split the front of the henley on Friday night while watching It's a Mad Mad Mad Mad World with Rick and the girls. (I'd decided that I needed some comedy. I realized afterward that while I adore slapstick, I tend to prefer slapstick that happens unexpectedly in the middle of something else to the constant, unrelenting sort of chaos in a film like that. Which isn't to say that I didn't laugh out loud many many times during the movie, just that I'm refining what it is that I find truly hilarious.) On Saturday morning, I finished the right front before lunch, and then I finished the left front during the afternoon before dinner. I even managed to make that dinner, a big pot of vegetarian black bean chili with butternut squash and bell peppers and black beans. Mmm... And then last night I cast on for the first sleeve and pounded away on that for a while as I watched the Olympics (staying up until after 11:00 to watch the aforementioned Apolo Ohno).

That makes one back, one front, and the better part of a sleeve to date. Not bad, but not a gold medal, yet.

This morning I woke up early and got straight to work. My goal is to finish this sleeve today if it kills me. Which it might. There's a lot of sitting still happening here. We did, however, take quite a long break in order to go mattress shopping, which was very successful, and high time. It was, as my mother would say, a good job done. We also got new sheets for the bed that's going into Older Daughter's room, as well as some nice outfits for her for some events that are coming up in the next couple of weeks.

That's all very well and good, but it's not knitting, and I've got a gold medal to win, so I'd better get a move on here, eh? If I get the sleeve done today and cast on for the second one, I figure I might just have a shot at finishing by Sunday. Maybe. It's a crazy-busy week, with not much in the way of daytime knitting time (mostly because of all of the other work deadlines that I am dealing with; I figure neither my chair nor the Dean is going to be particularly understanding if I call in and say that I can't work this week because I'm knitting for the States, eh?), and then we're going to be up and out very early on Saturday to drive up to Thousand Oaks for Younger Daughter's feis. All I can say is that this is going to be a photo finish, so stay tuned.

In the meantime, I'd wanted to get some pictures today of the progress, but it's gray and drizzly, so here's a quick PhotoBooth shot, just to prove that I'm not talking out my ear. 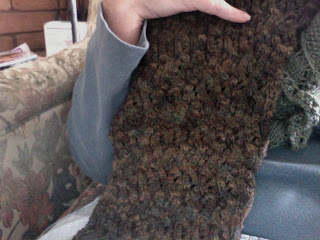 Oddly enough, that top bit's about as close as I've come yet to capturing the glory that is the color of this yarn. I'm still charmed to pieces by it, which is a very good thing in this kind of knitting project. Chris, too, is chugging along, and I'll post updates of her sweater as they come through. Go, team, go!
Posted by Knitting Linguist at 3:33 PM

I finished sweater number 1 today (I can't wait to try it on & take pics, it's drying as I type), and am into the body of sweater number 2, it will be a challenge to finish both in two weeks, but I'm gonna push myself!!

I know you said granite, but I was thinking it looked like tree bark. In this shot it really reminds me of tree bark.

Wow! You're totally rocking that sweater! I see a gold medal in your future for sure!
I wanted to finish the last sleeve on my cardi but I totally got distracted by the crackghan... good thing I didn't sign up for the Olympics!

Seriously, I hope you achieve your goals.

Life just has this habit of getting in the way. It is looking gorgeous, plenty of incentive to keep going

Cheering you on from the sidelines. I agree, this sitting so much is hard on the body!

Wow! My hands are tired in sympathy. Don't forget to breathe - this is more distance than sprint. (Did you get it done? Did you? Did you?)

Gorgeous colours in that yarn.

Good luck Jocelyn!!!! I know you can do it. In the meantime, I am plugging away on my Sprossling. . . . but am getting side-tracked with a harp thing I have to play for on saturday (WHY did I say I'd DO that!!!!)

Looking down at that photo I thought at first you are petting a lovely dog,,, I think those ropes went to my head,,,,

You can do it! (to quote a famous Romanian coach)

I'm rooting for you! Go, Jocelyn, Go! On our trip to and from San Diego this weekend, when we passed the signs for Vista and San Marcos, I waved!

Love the colorway! And the cables make it look cobblestone-y to me. Great texture. I'm sure it's going to provide you with a lot of warmpth when you get to wear it -- which appears to be in the very near future!

We are rooting for you

You can do it!!
It is lovely...the piece you didn't add in is that I know you're still not feeling the best, so I hope the sinuses give you a real break soon!
Hang in there.
(((hugs)))

Too bad real life has to intervene in knitting time, huh? But, since I'm reading this after the Gold, I guess it didn't interfere too much!

We need to do some of that dreaded mattress shopping, too. Blech. Much rather be knitting. =)