I was taking pictures of various things I've been working on, and looking at pictures of some of the non-fiber pursuits I've been engaged in recently, and I think that there's a theme arising.  Let's see if you see it, too. 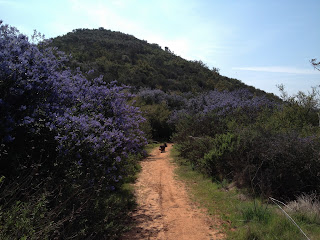 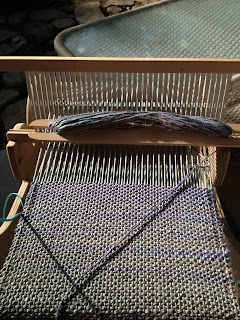 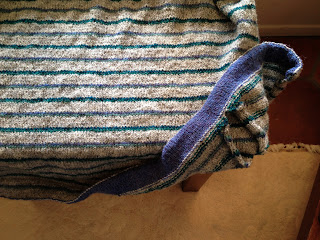 It's all purple and green around here, apparently.  I've been gazing out of my office window longingly these last few weeks, noting that the ceonothus are in bloom, but unable to get out there to enjoy them.  Last weekend, I took a nice long hike in the hills behind my house, and, as you can see from that top photo, they are blooming away. 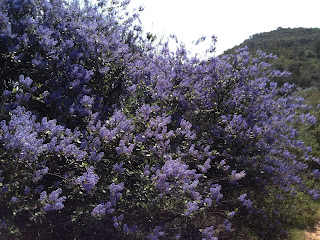 And buzzing with bees.  Walking along the path bordered in these bushes is like walking through a giant beehive.  The bees are so focused on the flowers that they almost never actually fly into the path.  I went again this morning, much earlier in the day, and found that bees' alarm clocks must ring later than mine.  It was quiet on the way out, and I got up to the top of the hill to find a lovely view waiting for me. 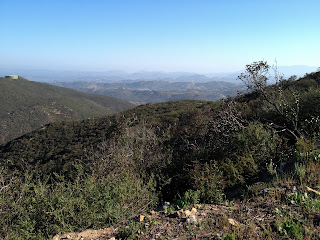 Mist-covered hills and mountains stretching away to the east.  And back down again in time to catch the sun making it over the big hill I'd just climbed. 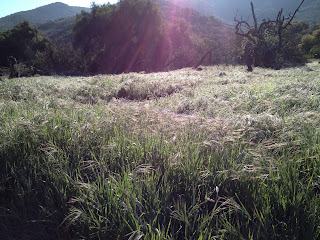 By the time I got back down, the bees were hard at work again.  I was relieved.

There's also green and purple in the latest knitting I've been doing. 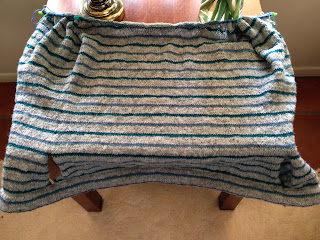 This is the body of the Northmavine Hoody, a Kate Davies pattern from her new book, Colours of Shetland, which I absolutely adore.  Totally aside from the patterns (there are quite a few in there that I'd knit), her writing is lovely, and she has essays about each of the places that inspired the patterns in the book.  It's truly a pleasure to read and look at.  The patterns are also well-thought-out, with the kinds of little details that I enjoy seeing in my knitwear - you can see the turned hem in the picture up top, and this pattern has several other details like that, the sort of thing that make it look professional when it's done - handmade, rather than homemade.  As you can see, I have finished the body, and tonight I will cast on for the first sleeve.  I'd love to finish this before the May Grey sets in around here - I think it could get some use.  It's knitted out of Jamieson and Smith 2-ply jumper weight, on size two needles, so it's a lovely weight, and a nice crunchy wool, in colors that I wear all the time (I admit to a total lack of originality on this one - I ordered the yarn used in the pattern, in the colours used in the pattern - but they are so me!).

And then some of you may have noticed that other picture I slipped in there.  What's that, you may ask?  That is the Cricket loom that my mom bought for me and the girls about a year and a half ago.  We wove the yarn included in the package, and then it rather languished.  When my LYS advertised a weaving class, using exactly this rigid heddle loom, I jumped at it.  So yesterday morning I went in and spent a lovely four hours at the store, re-learning how to dress the loom, and getting some good tips for using it.  When I got home, I spent a busy hour reclaiming my front and back patios from the chickens (have I mentioned that five chickens not only produce a good plenty of eggs, they also produce a good plenty of poop?), and trying to devise some way of arranging various patio furniture and cushions so that the chickens will not think that roosting on my patio furniture is a good thing.  (I'm also working on convincing them to return to their coop at night to roost.  They used to, until they discovered the couch on the front patio, so now they need retraining.  Any suggestions?)  Once that was done, I settled down on the back patio under the blooming wisteria (more purple and green, but no photos), listening to the bumblebees bumble about in the flowers, and weaving.  This morning, I wrapped the whole thing up, and got this. 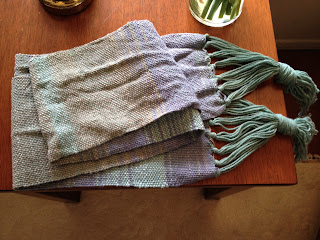 I'm pretty happy with the final result, especially given that it's my first time out, really. 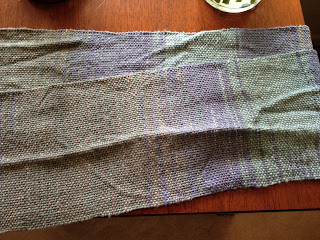 The warp is a merino/cotton blend, in a solid seafoam green.  The weft is a linen/rayon/cotton blend, variegated (as you can see).  I finished it by washing it in my washer on the wool setting, and then chucking it in the dryer for a bit.  I wanted to soften the linen up, and figured that tightening up the wool a bit wouldn't be a bad thing, and I was right.  It is much more drapey now, and will probably continue to soften up with wear.  As I was weaving, I got curious as to how this would have turned out differently had I switched the warp and weft yarns, so as soon as I was done, I redressed the loom, using the linen/rayon/cotton blend for the warp.  I didn't have much yarn left - really, this second time around is more in the nature of an experiment, and good practice for locking down in my memory how to dress a loom - so this won't be a "real" scarf.  I also realized that the girls had "misplaced" several bits and bobs (read: the clamps for fixing the loom to the table, and the dent hook), but I managed just fine. 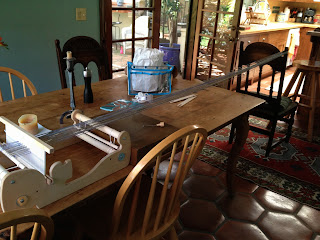 A heavy box pinned the loom in place and, in case anyone cares, an orifice hook works nicely as a dent hook. 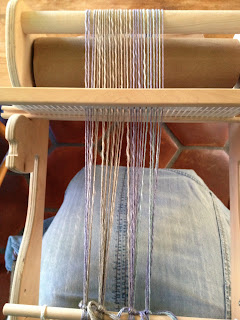 As I said, this will be half the width of the first one, but I'm plugging along, and it's interesting to see how different the two yarns look when woven the other way around. 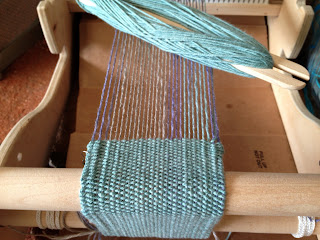 I know I'd said I wasn't going to get into weaving - too many fiber sports already.  But I figure a little bit couldn't hurt, right?  And it seems like a great way to start using more of my handspun, not to mention the rest of my stash.  In fact, to that end, I appear to have ordered another heddle, a ten-dent one this time (I don't think I'm quite using my vocabulary correctly; I'll get there), which is more appropriate to weaving the fingering weight yarn that makes up so much of my knitting and spinning stash.  I may also have ordered a stand for the loom and a book with some ideas for rigid heddle loom projects.

Posted by Knitting Linguist at 5:03 PM

Purple and green are wonderful colors, and no wonder they're popping up with the ceonothus in bloom!

I am thrilled that you're dipping your toes into weaving. It's so much fun! (And a 10-dent heddle sounds right to me.) It's a whole different world of color combinations, and they behave completely differently than they do in knitting. There's so much playing to be done!

Here I've been seeing so much yellow and orange--mostly deerweed, mustard and giant coreopsis. I think I'll go looking for purple among the greens and yellows.

Ahh, weaving. Yes, it's a slippery fiber slope. My loom is warped and I've done a bit of weaving. But, really, weaving may not be my thing although I hear you about using up the stash :)

I last tried weaving when I was still in Teachers' College (and you were still in diapers no doubt) and I could never figure out how to keep the edges straight so for assessment I wove a circular wall hanging!

Love the views around your home.

I have a scarf/stole still on my loom from over a year ago. It's just not as portable as knitting. This summer, I swear! Lovely flowers. We are still grey and late winter. March seems as though it has gone on for years.

Purple!!! With bees, though not in your knitting or weaving. I hope.

The next time I get a dining table, I'm going to make sure it's shaped right to clamp things on. I haven't figured out a stable and reasonable warping strategy for my Cricket. Which is proabably a big reason why I don't use it often.

Such pretty hills you walk in.

YOU DIDN'T just go and make me start pining for a loom, did you?
You.DIDN'T!
Did you?
OY.
You did.....
Beautiful green and lavender theme, btw.

I love the colors in that sweater - how could you have chosen anything else?

Gorgeous! And I hear you on the multiplying hobbies front. I've so far managed to resist acquiring any others- I don't have as much time as I'd like for the ones I already have. (Though if my stash gets much larger, I may have to consider it!)

Hurray for the weaving! And good for you immediately diving back in with the order reversed! Your scientific mind is at work.

I haven't decided which of the patterns to do first in the Color of Shetland book. So far I've just luxuriated in the beauty of the book. That sweater have certainly been calling my name. You're making such fast headway it's probably finished by now.

You 'may have'..that is pretty hysterical. Too bad I had not read this after seeing your heddle arrive at the shop;)

Well, the past few weeks I 'may have' ordered a bunch of different fiber and products to 'research' quality and product presentation. I have to know what is out there in order to find a niche for my little farm goods, right??