I keep trying to figure out how to start these posts.  It feels to me, in some ways, like starting in the middle of the story - giving updates on where I am now, presupposing everything that's happened in the last year.  At some point, I'll go back and write about how I got here.  But not today.

Today, I'm thinking about how I've been learning to negotiate with activities and objects that I really never had to think about before.  One interesting aspect of RA, for me, is that, while I'm very lucky and none of my joints has undergone remodeling, they certainly aren't unaffected.  They can be uncomfortable quite a bit of the time, and sometimes actively painful.  But worse, for me, is that they often feel weak.  In a lot of ways, that is the feature of this year that I've had to bring all of my self-compassion and mindfulness to bear on, in order to avoid ruminating and spiraling into worries about a future that hasn't happened yet, and which may never come.  I grew up playing piano - my first real job in high school was as a piano teacher.  I knit.  I spin.  I write by hand (and love my fountain pens and Traveller's Notebooks).  I ride my horse.  I cook.  In each of these activities, I have always taken the strength and dexterity of my hands for granted.  Up until a year and a half ago, I had never cut myself with a kitchen knife - ever.  (And I cook a LOT.)  I zested my thumb with a lemon zester once (I don't recommend it), but that's it.  And then in the course of two months (February and March 2017), I cut myself twice, once badly enough that we sort of stared at it for a while and wondered whether it needed stitches (especially when it would NOT stop bleeding for half an hour, while I put pressure on it and held my hand over my head).  It was so unlike me that I didn't quite know what to make of it - I am not (was not) clumsy with my hands.  It wasn't until much later that I put it together, and came to think of it as the first joint-related warning sign that all was not well.

Rereading that, here's the statement that I think captures the emotional tension of the last year:

I am not (was not) clumsy with my hands.

One place where I have to do a lot of negotiating is at the barn.  The spigot handle of the hose I use to fill Disco's water bucket is often really tight, and the nozzle we've attached to the hose takes me two hands to open up and close again.  I have learned to notice the frustration and anger that arise when I struggle with these tasks.  Mostly, I manage to take a deep breath, laugh a little, and go back and take it slowly.  Mostly.

On days when things hurt, one of the toughest barn jobs is also one of the most ubiquitous - picking out Disco's hooves.  This is something that I need to do before and after every ride (and I also do it after turning her out) to make sure she hasn't picked up a stone which would stay lodged in the frog of her hoof, or under the shoe - that's uncomfortable, and not so good for her.  It also gives me a chance to check her shoes, and the condition of her hooves, and how her feet and legs are doing.  But hoof picking is a tough task.  It involves bending over, picking up a hoof, and holding it while I dig out anything that's gotten stuck in there.  D's pretty good about it - she picks up her hooves politely when asked (she even anticipates which hoof is next), but she doesn't do all the work of holding them up, and, lacking fingers and wrists, she can't do the digging out part (that's my job). 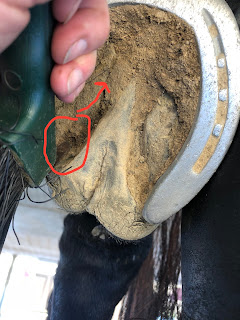 That's her back right hoof.  I'm facing backwards, with my right shoulder against her right back leg.  I usually hold her hoof up with my right hand, but (in the interests of trying to take a picture), I'm holding her leg up between my knees, and the camera is in my right hand.  I hold the pick with my thumb on top and fingers on the bottom - the circle shows the pick itself, and the arrow is the direction it's moving.  The goal is to get all of the dirt (and whatever it's hiding) out of there.
For fun, I also took a video of what this looks like.  But my main point here is that this job works my back, both wrists (one to hold up the hoof, the other to pick), and especially the thumb joint and wrist (which has to use a rotational movement to get the job done) of the picking hand.  And I get to do this eight times (one for each hoof before and after riding) whenever I get out there.

At the same time, I'm aware of how good for me my time with Disco is.  Physically, it motivates me to keep moving - and believe me, riding a horse like her in the ways that we ride takes focus, concentration, and a lot of physical work.  Emotionally and spiritually - well, there's nothing like spending time with a half-ton dance partner to ground and uplift at the same time.

All of this captures an interesting tension that exists for me at this stage of the disease.  On the one hand, I am feeling and living the things that are harder for me, or that I have to negotiate differently than I have in the past - and I am sometimes feeling that as a loss.  On the other hand, I am keenly aware that I haven't (yet?) had to give up anything, and that I am so very lucky to have that be true, and to have Disco (among other things and beings) to motivate me to keep it that way.  I'm guessing that I'm not at all alone in living that tension, or in understanding the importance of finding and embracing those motivators.

And speaking of motivators - here's another one, with something to celebrate.  Kivrin, my 17-year-old high school senior, got her license on Tuesday!  She's happy, and I'm happy for her (and for me, as you might imagine). 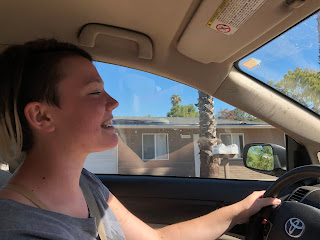 Labels: life with RA, the girls, the horse

I've been coming back to your blog fairly regularly to see if you've posted. Glad to read your writing, regardless of topic.

I had no idea of the effort involved in picking out a horse's hooves!

Hi, Polly - thanks for continuing to check in! I'm hoping to be posting more regularly - we shall see how it goes. And I know what you mean; I didn't know it'd be so much effort when I started riding six years ago, either :)

Nice little video of picking a hoof. I never thought about how challenging it could be for someone with sore joints. I have a number of barn mates with arthritis, a few knee and hip replacements as well. (OLder barn mates...) and I know what kind of adjustments they have to make. So happy you can still keep riding, as it is a balm for so much. This summer has been so hot that I haven't done as much riding as I would like. The Fjords have a fairly heavy coat all the time, and it seems unkind to push her much. So now I am moving her to the "Jenny Craig Pasture" to make up for her summer of only light work. (A dry lot.)

Hi! It is nice to hear your voice in my ears, even as I wish it were saying that you've got a line of therapy figured out that has not only stayed but reversed any RA progress.

What a delight, though, to see your daughter so grown up. I recall the Irish dancing with fondness, but the new adventures are equally interesting to watch. Having adult children has been so rewarding for us, and I'm sure will be for you and Rick.