I wrote this post in my head last Thursday, and then life got in the way and it didn't actually make it onto the page.

I wrote it while on a lovely hike (Thursdays are my work at home day, so I have a bit more time to actually get my feet onto dirt) during which I felt so good that I actually - get this - ran a little bit.  I can't tell you how long it's been since that happened.  And as I was jogging along, feeling pretty good, it suddenly hit me - I was feeling pretty good!  And then it hit me - that must mean that I've been feeling pretty not-good for a while, you know?

I know that seems like a weird thing to say, but this has happened to me enough times now that I recognize it.  It happened during several major bouts of depression, after my back surgery, and, several times now, with RA.

The obvious onset of RA and diagnosis came pretty quickly for me - I was very lucky.  In the spring of 2017, I visited Tess at Mount Holyoke, and I remember clearly being able to sit cross-legged on the bed, tuck my leg under me when I sat in a chair, and that I could hunker down to take photos of the ice on the long lake on campus.  That was at the end of March.  By May, I couldn't do any of those things.  By June, and definitely into July, it was becoming so painful to hook and unhook my bra, or to pull a t-shirt off over my head, that I began to worry that I'd have to start asking Rick to help me dress and undress.  I also found that if I sat for any length of time, getting up again was... well, let's just say it was really painful, and it took a few minutes for my hips to unkink enough for me to walk without hanging on to something.  I felt like an old lady - I'd stand up in restaurants and then just wait, hanging on to the back of my chair, to unfold, creakily, into some position that would let me walk.

And here's where I got lucky.  My GP sent me to a fantastic rheumatologist.  He asked for the full history of my symptoms, did a physical exam, and told me that even though my bloodwork kept (and still keeps) coming back negative for any of the markers of RA (or any other autoimmune disorder), he was sure it was RA. (As an aside, this is called seronegative RA, and about 30% of cases fall into this category.)  He then gave me a ten-day course of steroids as a final diagnostic - if I responded strongly, he considered that an affirmative diagnosis.

And boy howdy, did I respond.  The first two days, nothing.  And then on day three, I woke up, and people - I felt like I could rule the fucking world.

I say it like that, because that's exactly how I felt.  I felt huge and expansive, like I had more energy than I knew what to do with.  I could MOVE!  I could PUT ON MY CLOTHES!  I could THINK!  I wanted to start knitting projects, and go on walks, and find new books to read.  The list went on and on.  I wanted to ride my horse, and paddleboard, and and and...

Now, I'm pretty sure that at least some of that was simply the steroids (I now have a much better understanding of why people get hooked on them, outside of the world of inflammation and pain - I felt fanfuckingtastic!  Until the ten-day course ended, when I wanted to die; but that's another story).  But I also know that a lot of it was simply the contrast between what I was feeling before, and how I felt on the steroids.  I had known, intellectually, that the way I felt wasn't my normal self.  But my body and activities had adjusted, in some ways - in an unconscious form of triage, I'd given things up that I hadn't even realized I'd given up.  My list of priorities included things like, spending time with my family doing the things they like to do in the summer, taking care of my horse, and keeping up my end of the house-running bargain.  That all seemed like a normal summer, but it wasn't.  Usually, in the summer, I also exercise, and start new and complicated knitting projects, and think about my classes in the fall, and read books I don't have time to get around to during the year.  I'd also wanted to reboot the blog (as you may recall).  All of those things fell by the wayside, unnoticed.  And I somehow thought I was living my life, because the "real" stuff was getting done.

Until I had enough energy to do all the things I usually do.  Wow.

And that's what just happened again.  After diagnosis, I started on methotrexate, which is the first-line drug of choice for RA, because it's cheap, and it works for a lot of RA patients. I was on it for a number of months, until we realized that while I could live with the nausea if I absolutely had to, I could not live with the brain fade that stole my mind two days a week - my job requires me to have a brain, and to be able to find words; I'm a linguist, for goodness' sake!  I then went on leflunomide, with the goal of seeing how well it worked and then probably adding a quinine derivative.  Usually there's a three-drug regimen, but the third is a sulfa drug, and I'm allergic to those, so the goal was to see if the two drugs together could control the symptoms.  But when the doctor looked at my joints in February, he wasn't at all happy with the progression of the disease, and he started me on Humira.

This is where I talk, briefly, about how important health insurance is.  I absolutely canNOT imagine how people with an illness like this manage without it.  I have always been appalled by the lack of universal coverage in this nation, and having RA just makes me even more angry.  I am lucky - I have very good insurance, and it authorized my use of Humira, a drug which costs upwards of $24,000 a year.  But what about people who don't have insurance, and can't afford that (I couldn't afford that without insurance, and I make a good living)?  Doesn't their health and well-being matter to us, as a nation?  (I know the answer to that, I just don't like it.)  But that's a rant for another day.

In any case, the Humira wasn't perfect, but it seemed to be helping.  We'd just decided to give it a full six months before making the call on whether it's the right treatment for me, when I suddenly gained a bunch of weight in a very short time, had swelling in my belly, and began experiencing heart arrhythmias.  Which looks a lot like heart failure.  Which Humira can cause, in a small subset of people (who knew?).  So off the Humira I went for several months, while I waited to see a cardiologist for all kinds of tests.  The good news is that my heart looks fine, so the decision was made to try Humira again one more time, and I now have five injections (which means about ten weeks) under my belt.

And (and here's the punchline of this whole thing), I think it finally kicked in last week.  Because all of a sudden, I was running a little bit, and not wishing for/taking a nap most days, and I had brain space to think about swatching and casting on for both a sweater AND Kivrin's college blanket (more on that in the knitting round-up post I have planned).

What's weird is, I hadn't even really realized that I wasn't doing any of those things, until I found myself wanting to again.  I'd thought I was doing OK - work was getting done, all my to-do list items were getting checked off (or, at least, at my usual rate, which invariably involves moving some tasks from week to week - usually tasks that include a trip to the post office - am I the only one who finds packing things up an getting them to the post office strangely overwhelming?), so I was fine, right?

Guess not.  I hadn't realized how much I'd deteriorated, how much energy I was spending managing pain and discomfort and fatigue, until those things lifted, at least most of the way.

It's nice to climb a tree.  Which I also did. 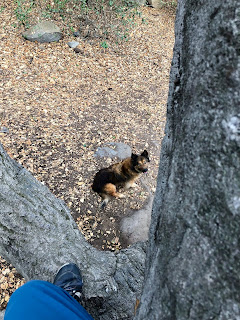 A tree invites me
Climb.  We embrace each other
in uncertain times.

Posted by Knitting Linguist at 10:24 AM

The view is nice from a tree, isn't it? Especially with a dog nearby.

I agree about national health insurance. And that would only be one rant among many.

I'm so happy to know you are responding to the drug and living fully.

Tilly has a look on her face that suggests she doesn't approve of your perch!

So glad that the meds are finally working. Now when I see those ads for Humira I'll think $24,000 per year. Don't run too far or fast!

Thought of you when I read this article. Glad you have a diagnosis and a treatment plan.
http://www.tennis.com/pro-game/2018/10/wozniacki-has-rheumatoid-arthritis/77686/